Madhvi Chittoor, also known as the #NoStyrofoamNinja, has served as a climate warrior in ending plastic pollution since she was just 5 years old. She has founded the global EcoEthics movement as well as her own nonprofit called Madhvi4EcoEthics. Not only that, she is also an author, a Blackbelt in Taekwando, and a Guinness World Record music composer.

Chittoor started making waves in the climate movement at an early age. In 2019, when Chittoor was just 7 years old, she worked to have her school district, Jeffco Public Schools, switch from using wasteful and carcinogenic styrofoam lunch trays to compostable ones. This change led to the elimination of 7.6 million styrofoam containers from going to landfills each year and protected students from harmful materials in the former lunch trays. Chitoor worked towards this for 1.5 years, campaigning and sending countless letters to her school district.

Chittoor has also spoken at many large events, including the Green Difference Award, Climate Rallies, Youth Climate Jam, and the Protect our Winters Outdoor Industry event. In October of 2019, she was invited to meet Greta Thunberg and speak with her on stage at a Denver rally.

In 2020, Chittoor worked with the Colorado Oil and Gas Conservation Commission (COGCC), campaigning for tighter groundwater, surface water, and stormwater conservation rules. To show her determination, she stated that she would not eat lunch until her requests were adopted. After adopting her suggestions, the COGCC openly recognized Madhvi for her contributions.

Chittoor was also able to meet Vice President Kamala Harris in 2021 when she presented to Harris her Global Plastic Policy Campaign. Impressed by Chittoor’s ideas and leadership skills, Madam VP Harris immediately showed support for her policy. Over the course of eight months, Chittoor collaborated with Madam VP Harris’s policy staff and with the US Secretary of State Anthony Blinken’s office. In November 2021, Blinken announced the US’s support for the Global Plastic Policy, and the United Nations Environment Assembly passed a resolution for the Global Plastic treaty shortly after.

One of Chittoor’s biggest victories came in July of 2021 when after working with 35 mayors across the state of Colorado, as well as legislators in the Colorado Senate and House, Governor Jared Polis signed Madhvi’s Plastic Bill into law. Through this law, styrofoam containers and single-use plastic bags would be banned from all Colorado grocery stores, restaurants, and cafeterias. This law was instrumental in minimizing plastic waste in Colorado and was a large step forward in the climate movement.

Chittoor has not stopped working since then. She has been significant in getting glyphosate, a widely used herbicide, pulled out of the residential market sector, protecting consumers from potentially harmful toxins, and she was recently selected as Child Advisor to the United Nations’ Children’s Rights Committee.

Chittoor’s work is just beginning, and she has been called “the bridge from the USA to all countries around the world for ecosystem work,” proving just how much she will do for the climate movement.

To learn more about ways you can invest in our planet, visit our toolkits, advocacy packets, and fact sheets. 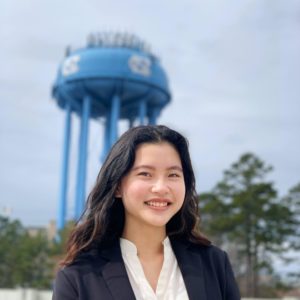